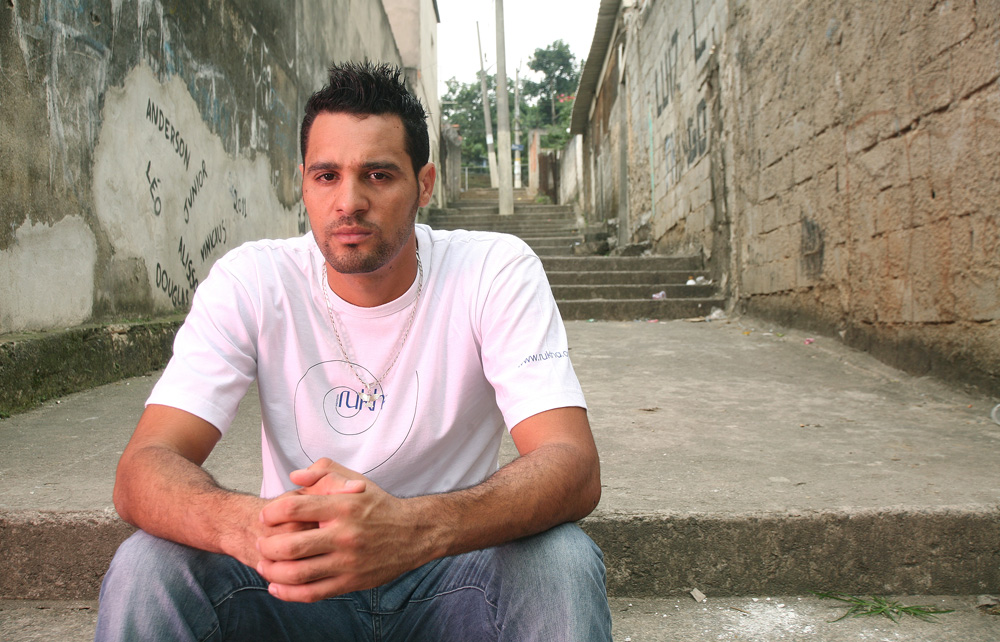 As Marcos Lopes recounts his teenage years as the head of a drug trafficking gang involved in turf disputes in a São Paulo favela, it sounds as if he’s narrating an action movie. Gesturing wildly to give more punch to the story, he laughs at the end of each recollection.

“Life was pure adrenaline. The other gang would show up out of nowhere and, ‘Bang! Bang!’ And then we’d shoot back, ‘Bang! Bang!’ One time they caught me unarmed. I was out getting a hot dog, just chilling, wearing nothing but my shorts, and suddenly, ‘Bang! Bang!’ I never ran so fast through the alleyways.

Another time, we thought we’d caught one of the rival gang members alone. It was funny. There were ten of us shooting, ‘Bang! Bang! Bang! Bang!’ and there was just this one tiny guy trying to shoot back, one bullet at a time, ducking behind his car. Thank God he escaped because later we realised he was a friend. We actually had mistaken him for someone else! His mom was so mad at me!”

Marcos laughs because these are a thing of the past. He quit crime, went back to school, wrote a book about his experience and eventually became a state school teacher. But losing one’s youth to the world of crime is still a very present reality in Brazil’s favelas. In the cemetery in Marcos’ neighbourhood, one of São Paulo’s most violent, two thirds of the graves are for boys aged 13 to 25. Some of them were his friends, killed in turf disputes.

The thrill in his narrative, though, is what catches the attention of dozens of teenagers gathered in school gymnasiums. Marcos started out giving talks to his own students. Later, other schools began inviting him to help prevent students from lives of crime before they even started. And he has now designed his own project to help rescue boys who are already in the ‘movement’ (the local euphemism for the business of drug trafficking).

As the country strives to find new policies to address the endemic violence within the country’s favelas, it is life stories and social projects like those of Marcos that may provide the answer. After everything he has been through, Marcos knows that merely reeling off statistics about violence is not enough to talk boys out of the risks and thrills of joining a drug gang.

While Brazil’s economic boom is providing new opportunities for underprivileged youth, the favelas remain stark reminders of a “nothing-to-lose” reality. These boys grow up among open sewers that reek during the day, packs of rats that scour the uncollected garbage at night and school classrooms that never see a single teacher.

When he was eight years old, Marcos made money by digging out and selling soccer balls that had fallen into the open sewers. When he got home, his father, an alcoholic, would beat him for traipsing mud into the house. It was hard to make sense of the punishment when he knew that the summer rains would flood the shantytowns with the same sewage water anyway.

“It’s not like I dreamed of being a drug dealer just because I lived in a favela. But ever since I can remember I wanted to walk with those boys. They were untouchable. I wanted that respect,” says Marcos, pointing out an important difference that policymakers are only just now beginning to understand.

“One thing is drug trafficking; another thing is territorial control and its consequences,” says sociologist Michel Misse, a professor at the Federal University of Rio de Janeiro and author of Crime and Violence in Contemporary Brazil.

When a drug gang takes over a favela, in addition to the violence that emerges from disputes with other gangs and the police, the heavy armament also creates a strong sense of one group’s dominance and control over the whole community. Misse’s argument is that these problems are greater than the drugs themselves and consequently require specific policies. “The country’s greatest challenge is to regain control over these areas and to reduce drug trafficking to a non-violent illegal activity, just like it is in the rest of the world.”

This is the main idea behind the Pacifying Police Units, or UPPs, a programme created by the state of Rio de Janeiro. First, the military police occupies the favelas and arrests drug dealers. Then a team, which has been trained to discard the old assumption that all youngsters in favelas are criminals, stays to build relationships with the community. Subsequently, state agencies come in, and urbanisation projects are implemented.

The programme was started in 2008, and the local media has since reported on UPPs that coexist with non-violent drug selling points. Before the UPPs, Rio’s favelas served as Marcos’ crime school. At age 14, he spent six months in Rio, where he befriended a local drug lord. He protected Marco, taught him how to use a gun and showed him how to mix and press cocaine.

Marcos understands the draw these drug dealers have on young children. He still smiles as he recalls how this friendship got him free sodas at the favela grocery store. “He was a hell of a guy; everyone respected him,” he says. The only time Marcos wished he was not at the drug lord’s house was the day the police came. “I woke up with them kicking my back; they beat me up, took all his money and some cocaine. That’s when I learned to hate cops.”

Back in São Paulo, Marcos was quickly able to put his newly acquired knowledge into practice. “We called up this guy who brought us cocaine. I already knew how to mix it with powder and other stuff; in the first weeks, we made 20,000 reais (US$9,650). It was easy to keep ordering it, but we never knew where the drugs were coming from.”

Brazil’s domestic drug distribution chain is spread out and difficult to track. The country is not a big producer but it is one of the world’s largest cocaine consumers and an important corridor to Europe. “We have two different markets for drugs coming from Bolivia, Colombia and Peru,” says Misse. “The big money is in the international route that only flows through Brazil; the real drug lords are at the top of this market. And there are hundreds of internal routes for domestic consumption, which are more horizontal in structure and have a number of intermediaries.”

Although drug dealing made him more money than Marcos could ever dream of, he started to get scared. He lost many friends, and one death hit him particularly hard: the loss of Ana Paula, his best friend and confidante. As with most girls, she did not get involved in the ‘movement’ itself but she was the girlfriend of a dealer. The day after she was murdered, Marcos ran to the second person he trusted most: Auntie Dag, or Dagmar Garroux, the head of the Casa do Zezinho school and NGO where Marcos used to play soccer and take creative writing classes before he became involved in drug trafficking. “You’re next,” she warned. “Come back to us, come back to your dreams.”

Marcos quit the movement and locked himself in the NGO’s library, where he read books and started to write about his experience. In truth, the Casa do Zezinho is constantly trying to entice young people, just like Marcos, to abandon drug use and trafficking. It is one of the places where children know they can go even if under the effect of narcotics.

When an educator notices a child or teenager is an addict, they are taken to a separate room and later to the NGO’s psychologist. “When they are users, it’s hard to wean them off the drug, but it’s not impossible. The real challenge is when they do not use drugs but are in the movement because those are the ones who know they can make a career off drugs,” says Garroux. In her 18 years since starting the NGO, she has lost two students to drug overdoses and 20 to trafficking.

The first argument Marcos uses to reach boys who are already in the movement is freedom. “What are you going to do with your money if you can’t even see the ocean?” he asks. In addition to the risk of losing turf, traffickers cannot travel because they become easy targets for other gangs or are vulnerable to police arrest. The first thing Marcos does when a teenager participates in his project is to take him to the beaches in the states of Rio de Janeiro and São Paulo.

“Marcos stretched out his hand, and I grabbed it,” says Anderson Aílton Odorico, a 21-year-old who was raised in what eventually became a crack house. He now lives with Henrique,* aged 15, who was using and selling drugs when Marcos met him through the Rukha Institute, an NGO that provides financial help and psychological treatment to families involved with illegal drugs or suffering from domestic violence.

Today, the Rukha Institute pays Marcos a salary to help him develop his project, which he has named ‘Get Your Shoes Dirty,’ a tribute to the kids who still play in the open sewers like he once did.

In the back of Marcos’ car, heading to the house where they live (with support from the Rukha Institute), Anderson tells Henrique how one of his friends from school recently read Marcos’ book. They both want to as well but they are still illiterate. With Marcos’ help, Anderson and Henrique have just re-enrolled in elementary school for adolescents. “Where can we buy your book, bro?” Anderson asks.

“You have to order it on the internet,” Marcos sighs. There are no bookstores in the neighbourhood they live in. “You struggle to get them out and interested in other things, but the surrounding still doesn’t help much.”