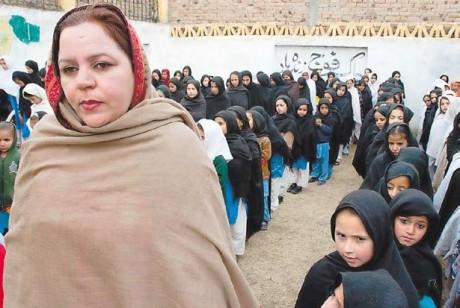 In a rundown building in the mountain village of Sijban, girls sit at their desks, hair loosely covered in white or black scarves, staring raptly at their teacher. They say they want to become either doctors or teachers when they grow up.

This is the one government primary school for girls in the Swat valley that was spared destruction by the Taliban. Their headteacher, Gul-e-Khandana, is no ordinary teacher: she stood up to the Taliban and managed to save the school where she had taught for more than 20 years.

She still shudders as she recalls what happened: “A group of Taliban arrived with Kalashnikovs at the school building just before the school holidays in June 2008. I ran out and told them: ‘You will have to kill me first before you torch my school’. They called me a kaffir [non-believer] and said they would be back.”

The Taliban had already destroyed the nearby girls’ middle school so, fearing the worst, Gul-e-Khandana removed the furniture and school records to her home. The girls had already stopped coming to school. But Gul-e-Khandana was determined. She was denounced on the radio, which was controlled by the militants. Her neighbours stopped talking to her and her extended family broke off all ties.

When the military operation began to flush out the Taliban from Swat later that year, Gul-e-Khandana fled, smuggling the school records under her burka. “Everyone thought I was crazy but I thought one day the Taliban will leave and we will re-open the school and the girls will come back. I wanted to keep the certificates and records.”

With the army operation completed, Gul-e-Khandana returned to Sijban in July 2009 and went straight to her school. “It was still standing! I was so delighted. I had feared the worst but out of the six classrooms only one room had been destroyed by mortar shells.” With the building more or less intact, she re-opened the school. “Many of the girls were still too terrified to come back to school and I started a committee with the help of the army that went from one household to another to convince the parents to send their daughters back to school.” Today there are 262 pupils enrolled in her school, more than before the Taliban came to Swat.

Other schools in the area, such as the middle school for girls in Shinkat, a village near the capital of Swat, were not so lucky. The school was completely destroyed by the Taliban in 2009. Salma, 17, recalls the day it was attacked. “It happened around 1 o’clock in the morning. I heard the blast. It made me very sad and I cried.

”Today, Salma is back at her newly constructed school in Shinkat and says she wants to be a doctor. Her teacher, Shanaz, says that now the Taliban have left the valley, enrolment is increasing. “More girls are coming back and many want to go on to college. There is a change; parents are willing to encourage their daughters. As for the girls, you can see the happiness on their faces, they are so happy to be back in a proper school again. Many lost almost two years of their studies.”

The Taliban destroyed more than 400 of the 1,576 schools in Swat. “Seventy percent of them were girls’ schools,” recalls Ensaullah Khan, who serves on the board of the Sarhad rural support programme, an NGO that is helping to rebuild schools. “Then as the conflict with the government intensified they started destroying both boys’ schools as well as girls’ schools. It was a terrible time. How can you build a nation without education?”

This is a question many people are asking in Pakistan, after the Annual Status of Education report, published in February this year, revealed that nearly 60% of school-age children can’t read. Girls fare the worst.

Another report, by the Pakistan Education Task Force in 2011, showed that Pakistan is second in the global ranking of out-of-school children. One in three rural women have never attended school.

Education in Pakistan is chronically underfunded. And the Taliban continues to strike in other parts of Khyber Pakhtunkhwa province. There are no official figures but estimates suggest more than 800 schools have been destroyed in north-west Pakistan.Maryam Bibi, founder of the NGO Khwendo Kor,

which has been working for girls’ education in Khyber Pakhtunkhwa province since 1993, is one of several who see the importance of educating girls. “We talk about equality and women’s rights and welfare at the policy level, but what is the strategy, especially for poor girls living in remote areas? We must educate these girls – then you are automatically ensuring that their health improves and that later on they have fewer unplanned pregnancies.”

Her organisation focuses on remote Valley where girls are the future International development With the Taliban driven out of Swat, girls can once again go to school areas where no schools exist yet. “The villagers themselves have given us space to run these schools for the young girls in the community and we try to involve the mothers as well by offering them short courses to improve their literacy levels. We are only working in remote areas where there are very few schools and opportunities. We try to find an educated girl in the village and then give her training and funding to run the school. So far, we are running around 150 schools on our own, but our funding is decreasing. We want the government to eventually take over these schools.”

Gul-e-Khandana believes that girls are the future for Pakistan. “Above all, girls must be educated,” she says. “When one girl is educated, she educates her entire household. The role of women is very important in our society – it is they who can change our way of life for the better.”

Khan agrees that schooling is the answer. “With education, we can change our future. We can save the people from falling into the hands of extremists. We can empower them.”