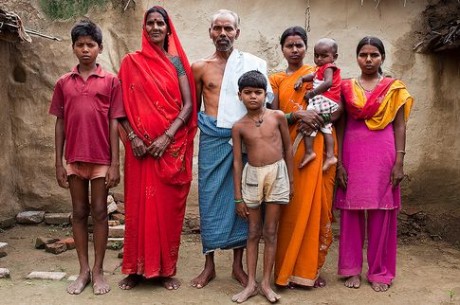 Jag Roshan Sharma decided to have a vasectomy because he wanted to make sure he could pay his children’s school fees.

The 36-year-old electrician from Hapur, a town in the north Indian state of Uttar Pradesh, already spends a fifth of his Rs 4,000 (US$ 71) salary sending his son and daughter to a private English Medium School. If he had any more children he wouldn’t be able to cover the fees and they would be sent to a local school where only Hindi would be taught.

Sharma didn’t finish school himself and he wants to make sure his 10-year-old daughter, Ruby, and 13-year-old son, Harinder, get the best education he can afford.

“The decision [to have a vasectomy] was taken jointly by my wife and me after we came to a consensus that we would like to maintain a certain standard of living for ourselves and plan a better future for our two children,” he explains.

“We always wanted our children to have an edge in life,” he adds.

“We would like to invest more for their bright future, in terms of both money and attention. If we have more children that would not be possible.”

In opting to undergo what is known as an NSV (No Scalpel Vasectomy), Sharma joined a growing number of Indian men opting to be sterilised to control the size of their family.

With a population of 1.2 billion and steadily growing, India is set to overtake China 2030 as the world’s most populous nation by 2030. This simple sterilisation procedure is one of the methods that the Government of India is actively promoting as it seeks to slow the country’s population growth.

The number of male sterilisation procedures performed in the public sector nearly doubled between 2006 and 2008. However, vasectomy rates are still extremely low, especially in Sharma’s home state of Uttar Pradesh, where vasectomy use is just 0.2 per cent – a quarter of the national average of 0.8 per cent.

“Men fear becoming the butt of jokes in the villages and losing status, as well as libido [if they have a vasectomy],” explains Dr Meenal Mehta, senior programme officer of Respond, a USAID family planning project which promotes NSVs.

“Women, too, believe that since men are the chief bread earners of the family, lesser levels of strength may reflect on their earnings.”
Respond runs projects in nine districts of Uttar Pradesh, India’s largest state. “Our family planning programme is especially focused on NSVs,” she explains. “We are trying to create demand for it through health workers, women’s groups and midwives, as well as through link workers.” Respond says the NSV is safer, simpler and cheaper than female sterilisation.

Over the last 18 months, only 5,000 men in Uttar Pradesh and Jharkhand (combined population of 232 million) have signed up for the procedure.

Yet Respond has found that encouraging men who have had an NSV to spread the word is helping dispel the stigma and superstition surrounding the operation.

Sharma is one of Respond’s so-called “link workers”. He talks to other men about the difficulties of having a big family and addresses their apprehensions – often fears that sex won’t be as good. “In fact, it is better now,” Sharma says. “I enjoy the moment and also do not have the tension that I may be saddled with additional responsibilities.”

While projects like Respond are helping to change mindsets, many challenges remain.

Community-based research carried out by Respond, based on interviews with 68 men and women in villages around Kanpur, Uttar Pradesh, revealed that while many people claimed decisions about family planning were taken by the husband and wife together, anecdotes suggested that the husband or mother-in-law tended to be in charge, leading some women to use contraceptives in secret.

Another contradiction was that while people said they want smaller families of ideally two children (mainly for economic reasons), the husband or mother-in-law often insist on more births until a boy is born.

“Being a mixed society, we have to tackle varying religious beliefs and sensibilities. People of the Muslim community feel that it is against their religion to use any method that acts as an intervention in childbirth. Secondly, in our society, having a male child is considered absolutely sacrosanct. Until the time a male heir has been produced, women are forced to produce babies, even if that means having eight or nine girls.”

Kelaji Adivasi, 45, lives in a mud house with a thatched roof in Karchana block in Allahabad. A couple of broken charpoys (wooden beds) make up the only furniture in her home. She has six children: four girls and two boys between the ages of 24 and eight.
Her eldest daughter, Vinita, 23, who has come to visit her, already has three daughters and is being pressured by her in-laws to have one more baby in the hope that it will be a boy. “My in-laws want me to produce an heir,” she says.

When asked whether she is using any birth control methods, Vinita says that she is not allowed to. Her mother explains: “These interceptions do not suit us. Those who have gone ahead and used any form of interception have faced a lot of problems. Either they have had health-related problems or in some cases, where sterilisation has been done, the family has lost all the children.”

Uttar Pradesh is the most populous states in India with 199 million people. It is also very divided economically. While being one of the poorest states, some areas have enjoyed an economic boom. The industrial city of Ghaziabad, in western UP, has good roads and transport connections. Close to Delhi, it has helped make UP India’s second-largest state economy. On the other side of the state, cities such as Allahabad, remain very poor.

Seema Gupta, 33, from Hapur town, 34km from Ghaziabad, was encouraged by her mother-in-law to have a tubectomy after giving birth to two sons.

By contrast, Sitara Khanam, 35, a Muslim woman from Banka Jalalpur village on the outskirts of Allahabad, has seven children: five daughters and two sons, ranging from 14 years to eight months. She tries to make ends meet on the small amount of money her husband brings home as a vegetable seller.

When asked why she had so many children, Sitara replies: “What say do I have in deciding the size of the family? It is all Allah’s gift. Where am I allowed to do anything or go anywhere in the first place?”

Dr Vikasendu Agarwal, a pediatrician at the Modinagar Community Health Centre, says the difference in people’s outlook to family planning is down to education.

“With education becoming more and more reachable in rural India, the mindset has already started changing,” says Dr Agarwal, adding that Muslim men have started coming to the CHC for vasectomies.

“This is chiefly because their living standards have improved and they have come in contact with other communities and other families who have had this surgery done and know that it is perfectly safe. These young Muslim men have in fact defied their peers and religious heads who had warned them against the surgery.”

Although India’s population is still growing – the population increased by 190 million between 2001 and 2011, the equivalent of the population of Brazil – the mean birth rate is in decline, falling from around six children for every woman in 1950 to 2.63 today, according to UNFPA. Experts say this is due to rising literacy levels and efforts to promote birth control.

Yet some doctors believe that government health policies are making matters worse.

By offering a cash incentive of Rs 1,400 to women living below the poverty line, Janani Suraksha Yojna (JSY), which roughly translates as ‘Safe Motherhood Scheme’, aims to encourage women to give birth in medical facilities rather than at home. Dr Chandan Lal, Chief Medical Officer of Karchana block in Allahabad district, says that families of expectant mothers are focused on the cash rather than the health of the mother.

JSY used to limit the cash payout to a woman’s first two children but this restriction was lifted in 2006 and the payment was increased.

“All their interest lies in claiming the cash as soon as they can and taking the new mothers back home,” Dr Lal claims. “The families use this money on outstanding loans or household goods. In some worst cases, it is even used by the husband to splurge on his drinks.”

“The cash incentive is at times used by the woman’s family as the reason for her to produce more and more babies, as every time a baby is born, she gets the money. In this way the women are being used as baby-making machines. The people in the villages do not want to listen and learn of any other means of controlling births, they also do not show any interest in sterilisation schemes until it is too late.”
He explains that women often come forward for sterilisation in their forties, for which they can claim a further Rs 600 from the government. “They earn money both ways – through JSY when they are in their prime child bearing years and through sterilisation when they think that there is no more chance of having babies,” he sums up angrily.