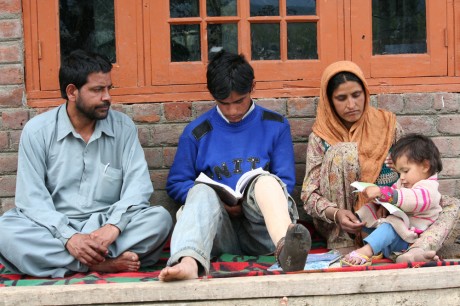 The children were simply doing what came naturally to them after finding a new toy on the road. But for Shabir Ahmad and his three schoolmates, this inquisitiveness shattered their world.

Three children from the Kashmiri village of Soothipora Gund, including Shabir’s nine-year-old brother Ashfaq, died after a discarded army shell exploded as they played. Six-year-old Shabir’s left leg had to be amputated above the knee and his pelvis was badly damaged, leaving him incontinent.

“There is an army camp just above our village,” says his father, Mohammad Yousuf Sheikh, a labourer.

“The soldiers had thrown garbage outside the camp where from the explosive had rolled down. Once the kids started kicking and hammering it with stones, it exploded.”

Army camps are a common sight in Indian-administered Kashmir since armed rebels rose up against Indian rule in 1989. A third of Kashmir’s territory – disputed since the end of British rule in 1947 – is under Pakistan’s control while the rest is controlled by India. India maintains that Pakistan trains the rebels and supplies them with weapons.

Official estimates put the loss of life at 60,000; many people more are maimed by land mines and unexploded ordnance. Often farmers in their fields or children stumble upon the shells after fighting between insurgents and the Indian army.

Hope Disability Centre, a non-governmental organisation which works in collaboration with Paris-based Handicap International in Kashmir, says more than 2000 people have been affected by landmines and explosives during the past two decades of conflict.

In Shabir’s case, his family maintains there had been no fighting; they say the shell was discarded through careless waste disposal.
Shabir is now a shy and reticent 14-year-old who loves cricket; he can’t remember much about the accident. His damaged bowel means it is hard for him to attend school full-time, going only two or three days a week until lunch break.

He tries to catch up by getting lessons from his 12-year-old brother.

“When I meet the doctor, I feel good,” says Shabir, who is being treated at the State Medical Hospital in the regional capital Srinagar.
“He helped me to cope, but I miss school too often. I think I would enjoy more at school in the company of other boys.”

A scan of Kashmiri newspapers over the past two years reveals that at least 20 people, mostly children, have lost their lives, and 17 others have been maimed by shells.

“It is the duty of security agencies to sanitise the surroundings of a place where they carry out combating operations,” says Khurram Parvez, the convener of the Srinagar-based Coalition of Civil Society (CCS). The Coalition is a joint forum of civil rights activists who highlight human rights violations. He says they are failing to fulfil this duty.

The Indian army’s spokesman in Kashmir, Colonel Jagmohan Singh Brar denies however that the security forces are failing to take sufficient care.

“We don’t throw garbage outside the camps and we also make it a point to clean the surroundings of encounter sites wherever and whenever we carry out combating operations.”

Shabir’s family received the standard compensation of INR 75,000 (USD 1500) from the Indian government, a sum they describe as a ‘cruel joke’. “This amount is not even enough for a year’s treatment,” says his father, Mohammad.

In most cases in which compensation is offered, the Indian government blames the injuries on militants. But civilians often refute such claims saying the Indian army plants mines in places they believe militants from across the border in Pakistan might enter Indian-administered Kashmir.

On just a labourer’s income of between INR 3,000 to 5,000 Mohammed must pay for antibiotics and laboratory investigations. At times, the family cannot take their son to hospital for want of money. At other times they barely manage two square meals a day.
Shabir’s mother, Zareefa Begam says, had he lived, their eldest son Ashfaq, would be earning by now. This would have helped her husband who, she says, is wilting ‘like an autumn leaf’ with the entire burden on his shoulders.

The family has had nothing from the army, not even an apology.

Most victims of landmines and unexploded ordnance in Kashmir come from poor backgrounds.

Gulzar Mir, 51, who lives in Warsun village in the district of Kupwara, is the only landmine victim in Kashmir who has succeeded in winning more than the standard compensation from the Indian government.

Mir, who sports a flowing white beard, and walks on two prosthetic legs, cuts a charismatic figure. He is now is generating hope for hundreds of his fellow victims.

“I was handed over a cheque of INR 75,000 rupees (USD 1500) by way of compensation when I lost my both legs,” says the father of six daughters and three sons.

Like others, Mir could also have settled for this, but he chose to challenge it in court.

Finding it too paltry a sum, he filed a lawsuit against the Indian government challenging the ‘irrational way’ in which he was being compensated.

After six long years, he won his case in 2010 and the court asked the Indian government to pay him 1.2 million rupees (USD 24, 000) because it had planted landmines in a forest area without telling the people living just nearby.

“The forest used to be a pasture for our livestock and we would bring firewood and vegetables from them. But, now, we don’t dare to go there.”

The decision of the court in Mir’s favour has emboldened him and he has now resolved to fight for his fellow victims as well.
Mir has formed Jammu & Kashmir Landmine Survivors’ Association to bring all the survivors under this banner to fight for their rights. “I have started the survey to trace all these victims,” he said.

“Look at this boy [Shabir]. He is the victim of sheer carelessness on the part of army,” he says.

As for Shabir, his chief wish for the future is that he is ‘not dependent on others’. It’s a dream, his doctor says, which is within sight.
“The problems will persist for some time, but we will overcome them,” says his doctor, Mufti Mehmood Ahmed, the Head of Urology at the State Medical Hospital Srinagar.

As long as Shabir can complete his treatment, there is hope he can rebuild his life.