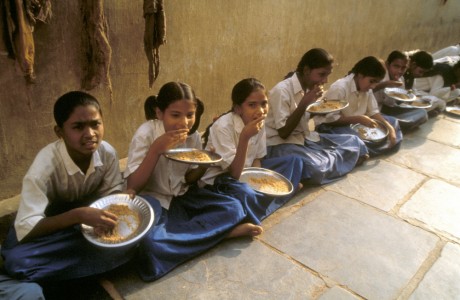 It is noon in the holy city of Vrindavan in northern India and the lunch bell has just sounded at Poorva Madhyamik Vidyalaya primary school. Seated inside her office, Rajendra Chandel, the bespectacled headmistress, shouts instructions into a megaphone. “All students can come out of the classrooms, sit down in a line to receive your food and pray to God before eating,” she orders. “Eat your food with love and once you’re done, put your plates on one side.”

The corridors shake as children – girls with pigtails flying, boys elbowing each other out of the way – seat themselves in neat rows on the ground in a front foyer of the school. On offer today are hot chapattis and a chickpea dhal served with a vegetable stew of potatoes, carrots and soybeans. A hush immediately follows as the children, deep in concentration, focus on their food.

Do they like the food? They shyly nod their heads. “What’s your favourite?” “Kheer [a rice pudding],” say a few. “Who brings the food?” They respond in unison: “Ak-sh-ay-a Pa-tra!”

Akshaya Patra is the charity behind these free school meals. In Hindi, Akshaya Patra means “inexhaustible bowl of food.” The charity drew inspiration from Swami Prabhupada, who founded the international Hare Krishna Movement. The story goes that he was inaugurating a temple during the 70s in Mayapur, located on the banks of the Ganges, when he saw children fighting with dogs for scraps of food.

“Immediately there were tears in his eyes,” says Narasimha Dasa, a Krishna follower who has been with the charity since it was founded in June 2000 and now heads the Vrindavan kitchen and temple.” He said children should not be fighting with dogs for food like this. We should strive that in all our centres, no person should go hungry within a ten-mile radius.”

Hunger still plagues almost half of India’s children. An estimated 55 million children under five are underweight, according to the charity Save the Children, putting child malnutrition levels higher than most countries in Sub-Saharan Africa.

With the backdrop of such a daunting social health challenge, Akshaya Patra has grown exponentially from serving just 1,500 children free, hot and nutritious meals in Bangalore to now reaching more than 1.2 million children across India. The charity has ambitions to reach five million children by 2020.

The charity blends generous portions of missionary zeal and technological innovation with a dose of government resources and private sector efficiency, sprinkled liberally with faith-driven compassion.

Among Akshaya Patra’s staff are 250 full-time Krishna devotees, including Chanchalapathi Dasa, the 47-year-old vice chairman of Akshaya Patra. Dasa says one reason they have been able to scale up without diluting their mission is a conscious approach to “work with the government rather than criticise it”.

The Akshaya Patra Foundation is the largest service provider for the government’s Midday Meal Scheme, which reaches over an estimated 120 million children, making it the largest school dinner programme in the world. The charity receives almost 60 per cent of its operating budget from the government in addition to a monthly supply of free grain.

The government’s Midday Meal Scheme began as far back as the 1960s but developed teeth only after 2001, when public and media pressure resulted in a landmark decision by the Indian Supreme Court, by which all children studying at government schools were legally entitled to a free midday meal. Like all government schemes, however, it has been plagued with problems of corruption and poor quality service-delivery.

“Service delivery is a genuine challenge,” says Dasa, a Krishna devotee and trained engineer. “The government used to give 3kg of rice per month to a child who attends school 60 per cent of the days in a month. We saw a child would take the rice home and the father would sell it and buy alcohol. This is the reality. The only solution to this is strengthening civic society participation, joining hands with the government and doing service with a nation-building spirit.”

The shortfall in Akshaya Patra’s budget is covered through individual and corporate donations. “We have to a have self-sustaining model,” says 27-year old Lalit Saraswat, a junior manager with Akshaya Patra. “Sometimes the government grains are delayed or a bit short. But we have to a plan B so that the children get the meal every day at the same time.”

The missionary zeal stems directly from the cadres of Akshaya Patra, the majority of whom are Krishna devotees with backgrounds in engineering, medicine and other specialised professions. The result is an array of indigenous technological innovation, including customised machines on display in the state-of-the art, industrial-sized kitchens the charity runs across India.

Save the chopping of garnishes, everything in the centralised kitchens is automated. In the early hours at around 3am, around five dozen men start work in the Vrindavan kitchen.

At the top level of the kitchen, workers operate vegetable washing, cutting and peeling machines. The vegetables are then tipped into giant cooking pots one level down. On the ground floor a massive roti-making machine automatically kneads dough, flattening it and cutting out perfect rounds. It churns out an astonishing 35,000 soft and evenly-oiled chapattis every hour.

By morning, they will have produced hot, strictly vegetarian meals for 150,000 children at more than 1,500 schools in the larger district of Mathura in Uttar Pradesh.
Balwinder Singh, a white-bearded Sikh, built, operates and maintains the roti-making machine in the Vrindaban kitchen. He worked for Om Engineering, a Punjab-based manufacturer that made biscuits and savoury Indian snacks before being approached by Akshaya Patra. “This machine can eat up as much flour as you feed it,” says Singh, proudly. The 55-year-old is illiterate but has been working on machines since he was 13. “Its boss is God,” he adds with reverence.

“Very few jobs give you the chance to serve God, earn a living and do a good deed like feeding children,” says Amit Kumar Kumar, who has been working the night shift for four years.

Vrindavan is one of 16 centralised kitchens run by the charity, serving more than 8,300 Indian schools across the country. There are a further three decentralised kitchens set up to get meals to more remote and marginalised areas. The charity has collected numerous accolades, including a Tech Laureate Award from the Tech Museum in California for “leveraging technology to benefit humanity.” In 2007, Harvard Business School used Akshay Patra as a case study illustrating precision time management.

Turning around malnutrition on the ground remains complex. In 2010, the charity commissioned AC Nielsen, a global marketing research firm, to assess its impact. The sample study concluded that while there was at least a 10 per cent increase in enrolment and attendance rates in schools where Akshaya Patra served food, there was little significant improvement in the drop-out rates or scholastic performance and only a marginal improvement in nutritional status.

The sample study, which was conducted in four locations excluding Vrindaban, also stated that an overwhelming 98 per cent of sample students turned out to be Hindu. Despite officially being a secular operation the programme in Vrindaban asks Lord Krishna to bless the cooked food and children chant a mantra to the Krishna god (check) before eating.

The low take-up among other faiths suggests that some state schools are less comfortable about opting for a school dinner programme run by a Hare Krishna charity.

Nevertheless, teachers in government schools where Akshaya Patra’s food is served, readily acknowledge its positive effects on the children. The biggest thing is that it has reduced the wastage of teaching time,” says Chandel, headmistress at Poorva Madhyamik Vidyalaya primary school. “Children now stay in school after lunch rather than running off. They are also getting more vitamins and protein and most of them relish the food.”

Outside Chandel’s office, 13-year-old student, Rajkumar, has more than half a dozen chapatis piled on his plate. He recalls the day Akshaya Patra first came to deliver food. “They had halwa [a dessert] that day and I couldn’t attend school for some reason,” he says. “But I heard about it and came rushing to school to get some.”

* This feature was produced in 2010 by Panos London and published in Sweden. This article was originally featured on Panos London Website.