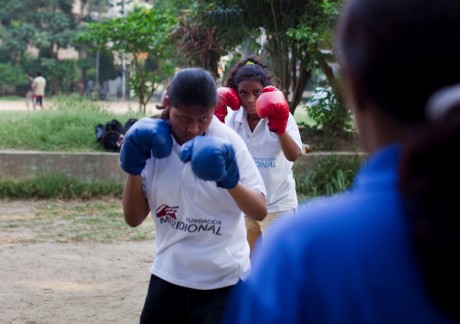 The ring is basic: a raised platform with a simple roof in the open air of a park. People come here to walk, children to play, and several visitors stop to watch a group of girls getting ready to train.

The girls are relaxed, unfazed by the attention, wearing loose tracksuits, shorts and t-shirts. They laugh over a shared joke as they lace up their gloves. As the gloves come on a focus takes over and soon they are lined up, under the watch of their coach, Razia Shabnam.

Fists up in front of their faces, bouncing on their toes, they jab the air in quick succession. They have come to box.

In most cities in the world a group of girls boxing in a park would turn a few heads; even more so in Ekbalpore, a predominantly Muslim area of Kolkata. Whereas elsewhere in the city jeans and T-shirts are becoming more normal, here most girls wear the traditional salwar-kameez with a dupatta shawl to cover the upper body, while their mothers and grandmothers wear burqas.

Ekbalpore lies near Kolkata’s docks. It is densely populated, with houses crammed together in lanes and by-lanes. Unemployment is high. Many families run small businesses or work as tailors, embroidery workers for bigger companies or run small shops.

Social attitudes towards women are more conservative than in other parts of the city and girls are married off early, sometimes in their teens. But these attitudes are slowly changing. Increasingly girls are going to college and aspire to get jobs. Teaching is the preferred choice.

Razia, the girls’ coach, has helped to break the mould.

Now 30, Razia, had to fight outside the ring, as well as in it, to get where she is today. She was one of the first women boxers in Kolkata. She was also the first woman in her community to go to college.

She is now a coach and one of only three international female boxing referees in India, a role that has taken her to Turkey, Russia and Taiwan.

“When I took admission at college, my uncle and many other so-called well-wishers came to warn my father, saying: ‘Do you want your daughter to go astray? She has completed her schooling; that’s enough. You won’t find a groom for her,’” Razia recalls. And when she enrolled herself on a boxing course there were more shocked remarks that it was not “right” for a Muslim girl to take up the sport.

She proved them wrong: she is now happily married with a young son. “My husband has been a great support,” she says. “He says, ‘I love you. If you are happy with boxing then I won’t prevent you from doing it’.”

“I’d say there has been a perceptible change in attitude towards me,” she adds. “People in the locality are proud when they see write-ups about me in newspapers.”

Razia is the only one among her six sisters-in-law who work. The others are housewives. She lives alone with her husband and son – quite unusual in a society where women tend to move in with their in-laws when they marry. When she goes out she leaves her son in the care of her mother who lives nearby, or brings him with her to matches. However, she says she still feels the patriarchal attitude that governs “a society like ours”.

“There is a wish for male colleagues to dominate and a reluctance to give credit where it’s due,” she notes.

“Women have tremendous potential but do not get the opportunity to bloom due to the social and mental restrictions of a conservative upbringing,” he says. “Women are also adamant: if they want to do something, they do it. They have the ‘brawn’ to develop into tough opponents but need encouragement and support.”

India now has around 200 women boxers, according to Banerjee. He believes the pioneering spirit came from the poor Muslim neighbourhoods of Kolkata, under his tutelage.

Banerjee remembers that when he first went around Ekbalpore to persuade parents to let the girls box, some would arrive wearing burqas over their tracksuits. Things have changed a lot since then.

Recently the Ekbalpore community approached him to say they would raise money themselves to build a boxing ring.

“They say that once the local women – mothers who hardly step out beyond the locality – watch their girls learning to box and see what it does for their self-confidence, they send them willingly to train,” says Banerjee.

Noor Afroz, 24, is one of Razia’s protégés. She has been boxing for ten years and has so far been in three national competitions. Every day she drives her motorbike – an unusual mode of transport for a woman in Kolkata – to the park to meet Razia, her mentor and friend. A petite 5ft 2, as soon as Noor enters the ring, she looks different. There is a certain confidence, a tightening of the jaw.

“Beyond the ring I’m just an ordinary girl,” she explains. “My mother has been in poor health for some time, so I do the cooking and look after house-keeping.” But once she puts on her gloves, she is able to forget everything. “Here I am an individual. I don’t have to depend on expensive gear, or too much money. It suits my attitude.”

She is chatty and laughs easily. “I always wanted to do something different,” she explains. “I love sports. My brother used to box but there was no facility for women where I lived. So I enrolled myself in a karate class. When I had the chance I switched over to boxing.”

While she didn’t have to overcome parental disapproval, there are other hurdles for Kolkata’s aspiring boxers.

“The main problem is poverty,” says Noor. “Many families can’t even afford the bus fare or the good diet necessary for a boxer.” The girls share boxing gloves at the club, as they are so expensive, and lament the fact that there is virtually no sponsorship for women boxers.

However, this may begin to change. Already assured a bronze medal, Mary Kom is India’s best chances of taking home an Olympic gold. And this year is the first time women have been able to compete in boxing at the Olympics, which has put women boxers in the spotlight. It is hoped this will translate into more funding for the sport.

For now Razia has set her sights on training a national champion. If along the way she teaches her girls to land a few punches against a society that tries to keep women down, all the better.