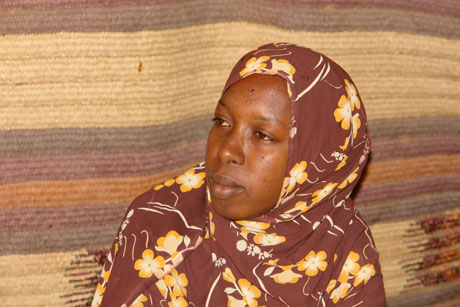 Madinah is 25, and an agricultural extension worker. She believes that slash and burn, forest clearance and over-grazing were carried out in the past because of people’s ignorance of the consequences. Now, she says, they are forced into selling wood and charcoal through poverty.

She has listened closely to her older relatives’ stories of rich pastures and an abundance of animal products. She believes that the future lies in tree nurseries and improved agriculture. With the right technology and financial support, the land could once again become productive.

Women suffer particularly from the effects of desertification, she says, taking on extra responsibilities as the men in the family migrate for work. However, women today have more choice over their marriage partner or the right to continue their education. At the same time, reduced income has generally meant that people marry later. When asked if this is why she remains unmarried at 25, she laughs and says “no – it’s just me!”

I am Madinah from El Ihemrat village, [which has] been affected by the desertification which hit North Kordofan and affected the forests, agriculture, grazing and even the local community. It even affected education – students can’t continue… When they reach advanced levels, they migrate to distant towns in search of work to help the family.

People are suffering from poor health, in addition to water scarcity, which has become very deep below ground… Life is difficult – the livestock numbers and the pasture are very small… The problem is work – we don’t find comfortable work – income is very weak in this area.

We used to work with IFAD in organizing the village – I too had a project, for which I borrowed from the bank – [I had] a mill and a generator. Now it is out of order. [The solution] is to buy cereal crops from Bara – when people buy grain from Bara they grind it there and then come back. If I had the capital, I would buy the grain and store it at my mill to sell to people.

I do handicraft. Handkerchiefs, tobes (loose embroidered dress worn over other clothes by women) and even men’s shawls – we make them.

The reason [for desertification] may be people – they are dealing with the forests in an uncivilised way. They cut down trees, grazed their animals, set fires – all these things led to desertification, for they didn’t know the consequences of what they did – and so the result was negative.

The situation is still bad – and people are still in need of intensive instruction and awareness-raising… If we found someone who cuts down trees we would try to make him understand that this tree is small, so don’t cut it down – and also [don’t cut] the hashab (gum arabic, Acacia senegal). Our work is to instruct [people].

Low incomes [are the cause] – the man should provide food for his family, and there is no other way but by cutting or burning a tree in order to sell wood [or charcoal] and provide income for his family… People are concentrating on the forest [for income]. Livestock are very weak and so is marketing. The largest family cannot own more than 15 or 20 head of sheep; some families don’t have any at all and some have as little as five or three.

They told us that agriculture was good [in the past]: you had good quantities of millet and dura (sorghum). You had the production of the previous year for a whole year – enough until the new harvest came. Nobody was buying things from the market.

As for animals, they said that they were many… My grandfather Abdul Rasoul had great numbers of cows and sheep. He took the milk and just poured it on the ground – he had no thought to market it or make anything from it – and even the eggs [were surplus]. No one could walk inside that gully because it was full of poured milk and broken eggs. Now, the land is empty and…there is nothing [in the gully] except a few trees…

They talked about the gullies or depressions in the land, which they watered by what was called nabro (an arched branch fixed to the ground with a bucket on the free end, which draws up the water from the well)… They told us that an onion could be half a ratul or a ratul (1 lb) in weight, and also that tomatoes could make a full dish they were so big. Today these areas are productive but they are not like they were in the past…

The environment was very rich [then]. There were many kinds of grasses such as begail (Blepharis ciliaris), hantoot (Mitracarpus villosis) and gargoob – these are good for animals. Now there are a few harmful grasses such as al haskaneet (grass with thorny seeds that helps its dissemination, Cenchrus biflorus). There is no benefit for the animals, no increase in the milk.

There were also productive trees like laloub (desert date, also called heglig tree, Balanitis aegyptiaca, useful for timber and medicine) and hashab, which fertilise the land and boost productivity. We also had hunting of animals such as deer, rabbits and birds – it was an area for tourism – but there’s nothing now. The animals died and the trees finished completely. The area was full of forests and greenery; now it is full of sand dunes. In the past, there were only two or three sand dunes – but now you can see sand inside the house.

There is migration. If there are four or five brothers, they won’t meet together for a whole year – if one travels to Port Sudan for one or two weeks, the other comes back home…most of the people are migrants – there is no stability. It’s seasonal migration…people travel and come back, but after a long time.

The one who travels or migrates comes back with new notions – you may have worked as a shepherd during your migration, but when you come back you want to practise trade or other things. Or you may know how to deal with the irrigated farm land or water pumps – they gain all these things from migrating for work – migration makes you know other communities, traditions and customs – this is the positive side…

Women suffer a lot from desertification – the problem is a simple one: if the man doesn’t migrate and he carries out his household duties, the woman can have a rest and she can be educated and perform her household chores.

But desertification has affected the area and the men have migrated – so women are bearing part of the man’s responsibilities: she cultivates or trades in vegetables and travels to El Obeid in order to help the man.

Women also face the problem of water – for she is the one who fetches it. The grazing and watering of animals are the woman’s responsibility – all these things have a negative impact on women…

Looking after children has also become a problem because women work outside the house and she doesn’t have enough time to look after her children. Some children reach the age of seven or eight, and are still not enrolled in the school. And some of them reach the third or fourth class and stop education in order to look after the animals of other people and increase the family’s income.

[Other] problems exist, notably non-marriage, as a result of lack of income… They say when a girl reached 15 years in the past she got married – and so did the boys. They married at younger ages – you couldn’t distinguish between the father and their sons – you’d think they were brothers. Now men get married when they reach 30-35 and the girls 25-30 years. I am not married. [Is the problem economic?] No, No – the problem is me [laughing].

[A positive change is that] in the past, the woman had no opinion or choice. The elders chose [marriage partners] by themselves – a man can even make a woman marry his cousin irrespective of her opinion – she had no choice. But now the woman has a right to say no, and a right to choose her husband – and to continue her education. And now there is an interaction between different communities: we have some girls from other communities living with us, as we have our girls living in other communities…

The solutions are that there must be nurseries for producing seedlings because water is available in the area – not like in other areas. People should take part in that, so as to maintain vegetative cover. And if the people use cooking gas instead of fuelwood, this could also help. They can’t use wood in buildings either.

[We can make progress] by popular effort – with ideas – with appropriate resources and even financial support. The most important thing is to make people understand that desertification is a result of what they did – and we are afraid that desertification may increase – in addition to introducing new projects which can help stop the sand dunes, and [introduce] agricultural technologies… the area is suitable for irrigated and rain-fed agriculture and there were many successful experiments, but it needs the introduction of technology.