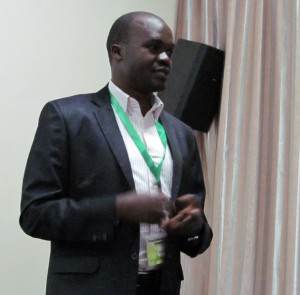 Speaking at the Second African Science Journalists Conference in Nairobi Kenya on 15 October 2014, Mr Banda said the weak links between journalists and researchers are compromising the quality of media coverage of scientific issues, thereby denying the poor and marginalised communities opportunities to access and use scientific knowledge to fight poverty.

“Our position as PSAf is that audiences across Africa have a right to know about research findings on issues affecting them such as agriculture, health, food security, and different health issues,” said Mr Banda. “The best way through which poor and marginalised people can get to know about research findings is through the media. Unfortunately, the linkages between the media and researchers are currently weak and this results in little or no information trickling down to the poor.”

PSAf is participating at the African Science Journalists Conference, organised by the Media for Environment, Science, Health and Agriculture (MESHA). This is part of the organisation’s ongoing efforts to strengthen linkages and collaboration between researchers and the media.

“When you look closely at most development challenges we have in Southern Africa, they stem from limited knowledge and information. Out of ignorance, people engage in risky behaviours that endanger their lives, the environment and stifle sustainable development,” said Mr Banda.

As a communication for development organisation, PSAf has been working to support public and policy debate on critical development issues in an inclusive and informed manner. The organisation has put a lot of emphasis in strengthening the capacity of community media to communicate research in the local languages of their respective communities.

“There is a lot that journalists can do to unpack, simplify and disseminate technical and scientific information in formats and languages that can be accessed by the poor and marginalised,” added Mr Banda. “The role of the media is to present facts and figures that can enable different stakeholders to engage in informed debate and take evidence based actions. Those facts and figures are mostly in research findings and other sources. This means for the media to provide the most comprehensive coverage on research issues, they need to liaise with researchers to get in depth understanding of the findings.”

PSAf is currently working with mainstream, community and online media entities across Southern Africa to building their capacity to communicate research. The organisation has also initiated a number of forums for the media and scientists to work together to make scientific information available in local languages and formats easily accessible by the rural poor.